This morning I have been privileged to attend Voice of the Future on behalf of the Royal Academy of Engineering. This event gives young (yeah I am still young after all) scientists and engineers an opportunity to put questions to the Science and Technology Select Committee, the Minister and Shadow Minister. You had to submit questions in advance with no guarantee of getting to ask any so I was very pleased when I got to ask one of mine, albeit rewritten a little.

The event took place in the Boothroyd room in Portcullis House, a location where select committees normally hear evidence from various witnesses. Except that this time engineers and scientists from various learned institutions were sitting in the “horseshoe” and asking the questions and the select committee and other politicians were sitting on the evidence bench giving the answers. There were four sessions and I have outlined a few thoughts on each below.

Voice of the Future was organised by the Society of Biology with the lead taken by Dr Stephen Benn who turned about to be son of Tony and brother to Hilary, later having to dash of to hear the leaders of the main parties say nice things about his father to the house. It is clear that who you know still helps in this world.

I got to sit in the horseshoe and ask the CSA about the devaluing of science in politics. My original rather bullish question about how we can believe politicians take science seriously given, for example, the total disregard for the evidence in the badger cull had been hand crafted to the following more general inquiry:

Is there a danger that when politicians claim to use science only to promote their own policies that science in the broader sense becomes devalued? In the case of the badger culling are these concerns justified?

In response to this (and a number of other points) Sir Mark of course referred to how science communication is a two way process, about how science policy cannot be made just on the scientific evidence, but other important factors like public will, economics and the wider (farming) industry will also be important. He also stressed that often evidence that informs policy is incomplete, but that the role of the CSA is to give the best scientific advice possible.  Interestingly, later Andrew Miller (Labour MP for Ellesmere Port and Neston), Chair of the Select Committee, said that the government had wrongly used the science on badgers.

careers can’t be planned, but opportunities must be taken

Interestingly this is not too dissimilar from my own career strategy, which I have in the past referred to as looking at the destination of the buses and then deciding where to go.

Perhaps the most entertaining part of the morning was when David Tredinnick (Conservative MP for Bosworth) came out in favour of homeopathy. And this from a member of the select committee! Luckily David Heath (Lib Dem MP for Somerton & Frome) brought some sense back suggesting that he preferred evidence to magic.

There were also some interesting suggestions when the committee was asked

What single major scientific discovery would you hope to see in your lifetime?

Jim Down (Labour MP for Lewisham West and Penge) went for room temperature superconductors; Sarah Newton (Conservative MP for Truro and Falmouth) went for overcoming resistance to antibiotics; Pamela Nash (Labour MP for Airdrie and Coatbridge) was interested in more deep space exploration; David Tredinnick was looking for the ability to transmit electricity without cables; Stephen Metcalfe (Conservative MP for South Basildon and East Thurrock) was interested in bedside diagnostic health tools; David Heath wanted to understand the origins of disease and Andrew Miller talked about the need to manage the planet’s limited resources, especially in the context of climate change.

Liam Byrne generally came across as pretty knowledgeable, forward looking and keen on science and engineering. But this of course is easier to do when in opposition. Interestingly he was very supportive of extending student loans to Masters level students which would be a big breakthrough if Labour were to adopt this as policy. It is a big if, but he was keen and enthusiastic on this topic. He was also very supportive of evidence based policy and very critical of the government for their lack of it. Again something much easier to say in opposition. When asked about the future for Scottish science if the referendum is returned in favour of independence he was very damning, suggesting that Scottish universities get 10% more funding than their share of UK GDP and would therefore lose out. He also warned of the potential loss of Horizons 2020 (EU research) funding should Scotland leave the union and enter a prolonged period of negotiation about joining the EU independently.

Positively for Southampton, Byrne also named checked the good work that the Faculty of Engineering has been doing in partnership with Lloyds Register and in building the Southampton Marine and Maritime Institute.

Compared to his shadow minister David Willetts was shorter and sharper and often seemed a little defensive. When asked about the increasing emphasis of impact on science funding and where this leaves fundamental research he was clear that there is no policy to discourage fundamental research. However, he was also clear that he saw benefits in all researchers being asked to think about the potential impact of their work.

When tackled on the negative impact of immigration policy on science (an excellent question) Willetts mostly dodged the question. He stressed that there is no limit on overseas students, but made no mentioned of the restricted terms of post study work visas which are having an impact on our attractiveness to overseas students, no mention also of immigration policy impacting on the employment of the best post docs, other academic or industrial staff.

More reassuringly Willetts seemed to suggest that the government and the National Environmental Research Council are moving away from the idea of privatising some of their research centres (such as the British Geological Survey), saying that this was not a proposal, only a consultation. He went on to stress the valuable resource available at the BGS which was also good to hear. 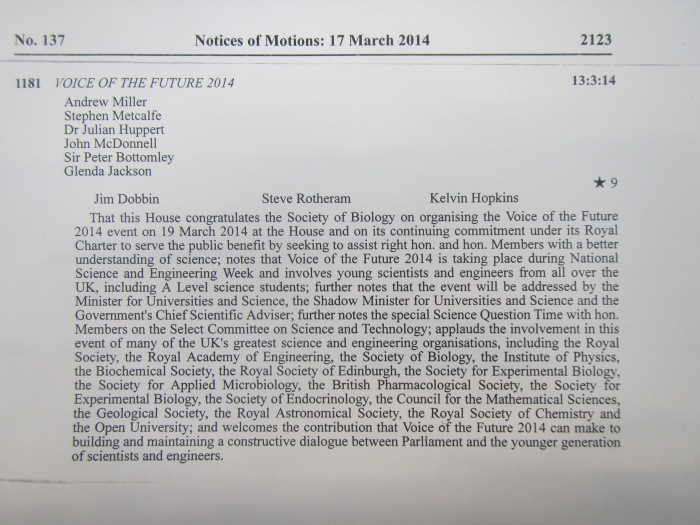